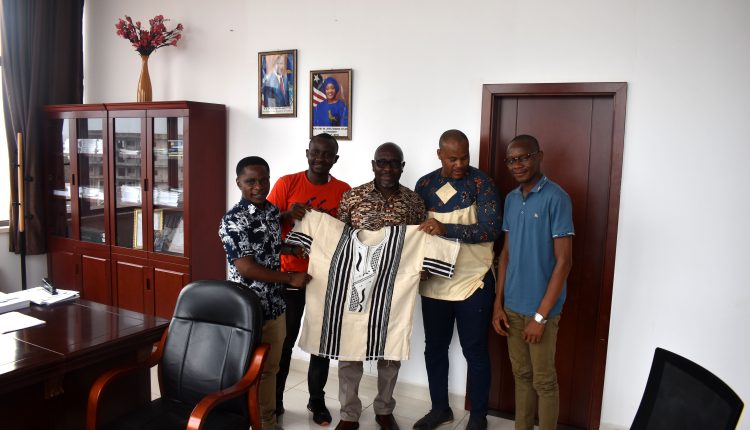 One of the easiest and most effective ways to motivate others is by appreciating them. When you appreciate someone, it indicates that you have recognized their efforts; it may encourage them to go the extra mile. Giving recognition inspires greatness in others.

A group of Medical Doctors paid a courtesy call on the Director-General of the Civil Service Agency Hon. James A. Thompson in his office.

Speaking on their motives, the Doctors said that it’s good to appreciate people who are professionally executing their duties even if it is what they are paid to do. “We are aware that the Director-General of Civil Service Agency (CSA) is required to render these services, but when done professionally for the good of the Country, such individuals need to be appreciated and recognized so that others will follow their examples”.

The Doctors further narrated that it was a challenge getting on the payroll since they graduated from the Medical School in 2020 but with the direct involvement of the Director-General and his team, including the Ministry of Health and; the Ministry of Finance and Development Planning they are today placed on the payroll.

In conversation with the Doctors, Hon. Thompson thanked the Medical Practitioners for such an acknowledgment. He further congratulated all Medical Practitioners in the country for working so hard in putting the country on a better health path despite the corresponding challenges; referencing the first of its kind – the Dialysis Machine that was brought into the country by the Government, which he said was very foresighted on the part of the Government.

The CSA’s Boss revealed a conversation he had with Doctor Wilhemena Jallah, Minister of Health that the Consultancy resources that are being managed be deployed in ways that will help the health sector.

Director-General Thompson was forthright to state that one of the major issues the Government is faced with, is sourcing finance to sufficiently address the many challenges within the health sector and other sectors.

He said that there has been a serious issue of Doctors being placed on the payroll. Notwithstanding, the Government is doing all in its powers in making sure every Doctor is placed on the payroll having understood that it is very disheartening to spend years in the medical school and training; and upon graduation, would find it challenging to be admitted on the payroll; more so, the need to have health practitioners assigned across the country can never be overstressed.

Hon. Thompson thereby called on Doctors and other professionals to compliment the Government’s effort in providing the needed services to the people of Liberia, especially during these globally challenging times.