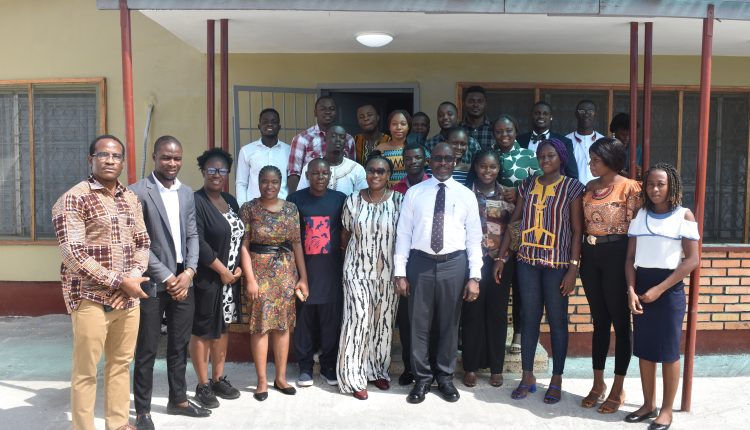 Candidates of the President’s Young Professionals Program who had an interactive Forum with the Director-General of the Civil Service Agency to ascertain the role of the CSA and how they (candidates) do fit within the Civil Service, were predominantly cautioned to be non-political in the discharge of duties should they become civil servants.

Being circumspect that when civil servants express their views, they should ensure that their views would not give rise to any conflict of interest with their official duties, or might not be seen to compromise the important principle of maintaining impartiality and political neutrality when discharging their national duties.

Hon. James A. Thompson in his reflection said the Civil Service Agency is the Government’s Entity responsible for managing human aptitude through recruitment and policy crafting and implementation for all civil servants within the One Hundred and three (103) spending entities of Government.

More so, the CSA is responsible for improving the human resources, service delivery, effectiveness, and efficiency of the Service; which entails planning, human capacity needs, recruitment and selection, training and development, performance management, and career development of civil servants.

Additionally, the CSA provides policy advice to the Government of Liberia in key areas of the Civil Service, including organization, staffing, pay and benefits, pension conditions of service, and human resources development.

‘’Sometimes, we experiment with initiatives and policies; and based on their success, we roll it out to other Agencies and Ministries.  For example – the establishment of a Welfare Division that is now successfully attending to the wellbeing of civil servants within the 103 spending Entities of Government; including Retirees”.

Speaking on the Testing Requirement as one of the questions raised, Hon. Thompson said, the Civil Service test did universally, and is provided not only to civil servants but to those who are also in the private sector. For those who are Civil Servants already, it is meant for promotional and other professional requirements; while for that outside of Government, it is an entry to becoming Civil Servants.

Digging further into the stance of political neutrality, Hon. Thompson alluded that coupled with his vision to make the civil servants more proficient in the discharge of their required functions, there is a need to de-politicize the civil service; because when civil servants who are the core implementers of Government’s policies are being politicized be it the ruling or opposition, it derails the efficiency of the Government’s performance at all levels and institutions.

“Don’t get Me wrong; I am not saying that Civil Servants should not be concerned about the political happenings in the country. As Liberians, it is each of Us right to be; but being overly political based on which side you support to the extent that it affects the effectiveness of your functions as Civil Servants, that is my concern”, the Honorable Director-General clarified.

Mr. Alfred Drosaye, the Principal Administrative Officer of the Civil Service Agency, intermittently, provided informative support throughout the discussion on the invite of the Director-General.

Speaking at the opening of the Forum, the Executive Director of the PYPP, Mr. Hh Zaizay was excited that the Candidates now got the needed opportunity to directly have an interaction with the Director-General of the Civil Service Agency.

The President’s Young Professionals Program (PYPP) of Liberia is a prestigious and competitive two-year program that recruits and places recent Liberian university graduates into important Government roles and provides them with training and mentorship as they support the government’s top priorities.

The PYPP was launched in 2009 by a consortium of visionary funders and with the support of the Government of Liberia.

Its aim is to offer mentors and supervisors that tutor young graduates and expose them to the government and professional world.

The PYPP has always been a hotbed of promising and gifted young Liberian University Graduates who are poised to make a difference in serving their Country.

The Forum was organized by the Career Management and Training Division of the CSA, with Deputy Director Sylvia Squire as the Focal Person.  Attending were, Mr. Alfred Drosaye, Principal Administrative Officer; and Joseph N. N. Swen, Head of Communication, CSA.