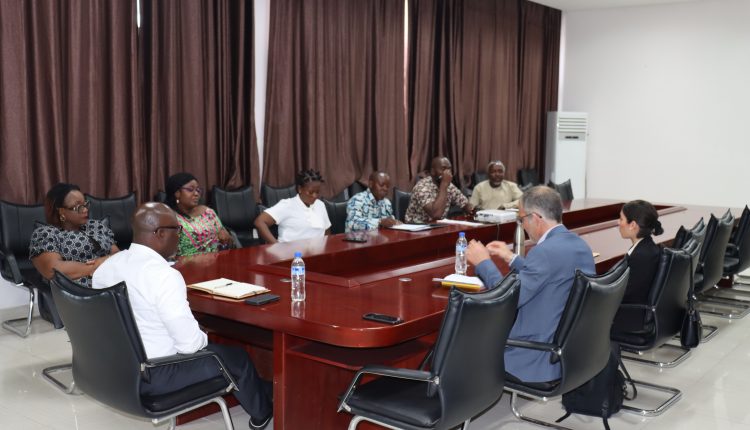 In a bid to avail training opportunities at the doorsteps of every Civil Servant across the Nation, the Civil Service Agency, whose fundamental function is to recruit and make provision highly qualified and professionally driven civil servants; a bedrock of an efficient service deliverable governance, would hunt every obtainable prospect in making its newly established Training Center a hub of knowledge acquisition.

At a well-represented Meeting held with a delegation from the Folke Bemodotte Academy, a Swedish government agency working to promote peace, security, and development, the CSA through its Director-General – Hon. James A. Thompson underscored the requisite need to heighten the aptitude of every civil servant by making accessible the needed opportunity.

Honorable Thompson in his introductory remarks said, ‘’we have established a Civil Service Training Center as we are bent on trying to bridge the basic capacity gap within the civil service; for which there are needs for training that would move more massively and focused on more basic competency training for lower-level civil servants”.

Hon. Thompson said, reading from the knowledgeable capacity of FBA, there is a need to integrate some of their capacity-building modules where possible and applicable within the CSA’s training programs, and thereby called for a more collaborative partnership for the success of the Civil Servants Training Center.

In response, Ellie Al-Kahwah, one of the two FBA’s delegation said, they as a team are happy to have heard from some of their colleagues about the cordial working relationship the CSA and FBA have had in the past, and with the hope that such collaboration shall endure further.

Moreover, Ellie said, the FBA’s Delegation had come based on information about an established Training Center from Claudius and Sylvia. Emphasizing, she said, “as the Delegation of FBA, though we cannot make any official decision on behalf of the Academy, we are here basically to hear about the development of the Training Center; to talk more about your needs and what way you think FBA can be useful. We are not here with our agenda, but to hear from you and what you are planning; and what your needs are. We’ve heard that the phase you are in now, but we will need more information focusing on the kind of training needed”.

CSA’s Director for Career Management and Training, Mr. Claudius Broderick in buttress, positioned the basis for the establishment of the Center. Director Broderick said, “We planned the establishment of the Training Center as a result of the new policy that has a serious interest in making sure that each civil servant has mandatory hours allotted for training opportunities for self-improvement”. It is against this background that the proposal was forwarded for assistance and thereby resulted in the acquisition of some assorted training equipment now available, Director Broderick revealed.

Director Broderick also mentioned that despite the already available training equipment, the Center requires assistance such as the creation of modules for those targeted courses; as well as the facilitation of some professional courses for example in leadership, Record Management, Monitoring and Evaluation, Rule of Law; and others that are necessary to improve the efficacy of the Training Center and by extension Civil Servants”.

Cyrille Hugan, a member of the FBA’s delegation, suggesting the creation of required modules, said, though FBA has the expertise and experience in developing modules, it is appropriate that modules be crafted based on the prevailing needs; hence, both the CSA and FBA should create such modules in unison.

Hugan, who seconded his colleague’s assertion about the Training Center, was optimistic about the would-be impact the Center will make.

It is an open fact therefore that in every functional and efficient service delivery- governance, Civil Servants are the driving forces; for which training opportunities meant to support building their competencies can never be exaggerated. Training is needed at every level; training brings an improvement in an employee’s skill, which in turn increases the quality of his or her output. Most especially, In-service training is the kind of education, which is done to help the individuals in organizations to acquire knowledge, skills, and attitudes on their jobs.