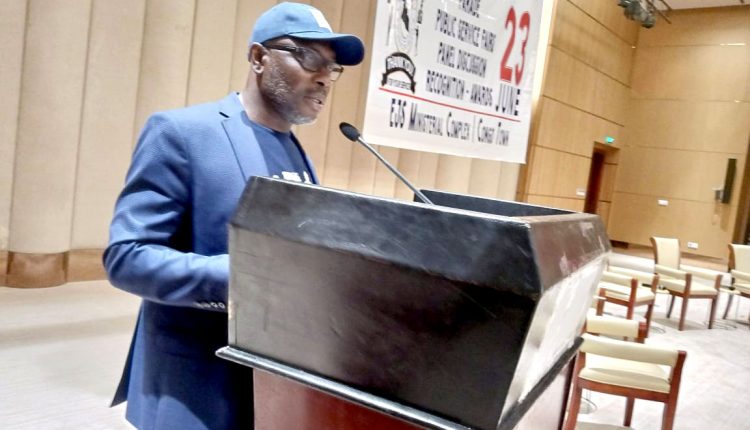 Liberia joined fellow Africans and the rest of the World in recognition and appreciation of the values and virtues of Her Public Servants towards national development amidst corresponding challenges in the discharge of their required duties; under the Continental Theme: ‘‘The Role of Public Administration in Building and Sustaining Peaceful Co-existence amongst Communities”.

Following a Proclamation by the President of the Republic of Liberia, His Excellency Dr. George Manneh Weah, Public Servants represented from all 103 spending Entities of Government, congregated for a colorful Day-long Event held at the Ellen Johnson-Sirleaf Ministerial Complex, Congo Town, outside Monrovia, in their respective occasionally designed Red, Blue and White T-shirts with the inscription “Proud Public Servant”, proudly jubilated under the sound and beat of melodious music and songs from a Public Service Day Mass Choir; the Armed Forces of Liberia Marching Band as well as a mounted musical set respectively.

The Celebrations, organized by the Civil Service Agency, a central government agency whose fundamental function and statutory responsibilities are to recruit, manage and make provision highly professional and motivated Public Servants within Government, included a parade of Public Servants through some major streets along the Tubman Boulevard; Panel Discussion on the topic: “ Youth in Public Service: In the face of mounting quest to amass personal wealth, should young Liberians be encouraged to pursue a career in the Public Service: How does it benefit the Country and its People? Panelists included: Mrs. Ciata S. D’Almeida – Executive Director, President Youth Professional Program; Hon. Dusty Wolokolie – Eminent Citizen; Mrs. Mary W. Mulbah Nyumah – President, National Teacher Association of Liberia; Dr. Ibraham Nyei, Research Fellow –Ducor Institute; Mr. George T. Wilson, III, Executive Assistant to the President of the University of Liberia as the Moderator. Also, during the Celebrations there were displays of Public Services dubbed, the Public Service Fair; where a few public and private entities showcase their services to the audience at their respective exhibition stands in the open space. At the Indoor Programs, presentation of awards, and a special tribute of honor to some retired Public Servants; including those of blessed memory.

In response to the recognition and honor, a Diplomatic Luminary – Ambassador George Wallace counseled young public servants to build their profession on the virtues of dedication, submissiveness, and trustworthiness.

The Celebrations also witnessed the recognition and honoring of distinguished Public Servants of blessed memory: Those honored were:

Professor Boley further stressed that becoming a public servant should be void of political, fraternal, and or ethnic affiliations; instead, should be based on merits through the civil service examination process while calling on the Civil Service Agency to apply all required standards in recruiting Liberians into the public service.

The Director-General of the Civil Service Agency, Hon. James A. Thompson said the purposes for celebrating the Public Service Day were: to celebrate the value and virtue of public service to the community; highlight the contribution of public service in the development process; recognize the work of public servants, and encourage young people in this age to pursue careers in the Public Sector.

Hon. James A. Thompson further said, in Liberia, the celebration of Public Service Day was a regular annual event until a few years ago, when it was curtailed due to several constraints. However, due to the significance of this event, the Government of Liberia through the CSA decided to recommence the celebration on June 23, 2022.

The CSA Boss, on behalf of the Government of Liberia, saluted all public servants and all public service providers for their commitment and dedication to service in the interest of the country and people. He acknowledged the huge responsibility of translating policies into actions for the benefit of the people of Liberia. “You do so with great sacrifice, many times going above and beyond the call of duty to be an effective public servant. The work you do not only impact the livelihood of people across your country but also helps to save their lives and keep them alive”.

The Celebrations were graced and applauded by Representatives from the Diplomatic Corps.; Donor Partners, Cabinet Ministers; others were from Legislature; Judiciary; Religious Community; while the rest were from the Civil Society Organizations, including the President of the Civil Servants Association of Liberia – Mr. Moibah Johnson.

It can be recalled on June 21, 1994, the African Union, then the Organization of African Unity (OAU), and the United Nations in 2002 adopted a Resolution declaring June 23rd of each year as Public Service Day to be celebrated by Member States in recognition of the value and virtue of public service.