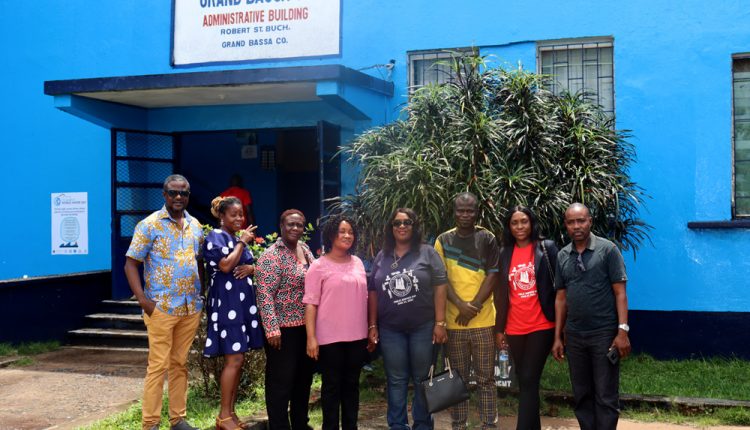 Deputy Director-General for Human Resource Management & Policy and entourage on Tuesday, June 28, 2022, for the first time since her takeover, toured the CSA’s Regional Cluster and the Bassa County University respectively.

The Team met with staffers at the Civil Service Agency’s Regional Cluster stationed within the Administrative Building of the city of Buchanan, Grand Bassa County. The Regional Coordinator Jonathan Reeves and his staff in a meeting updated the Hon. Deputy Director-General on the affairs of the Cluster.

Listening to the highlighted constraints ranging from inadequate office space, logistics constraints, and needed human resource advancement, the Deputy Director-General of the HRM/P – Hon. Onikeh Smythe-Jackson assured the Regional Staff that Central Office through its Regional Division is aware of the mentioned constraints, and that plans are underway to lessen the impasse.

According to Hon. Smythe-Jackson the reason for the Team’s tour is to bodily abreast itself with happenings; thereafter take the report to the Director-General Hon, James A. Thompson, who’s highly desirous of upgrading the human and logistical capacity at all Regional Clusters.

Evidenced of the Central Office’s decision to upgrade the Regional Cluster, the Deputy Director-General held a rental negotiation for an identified building intended to house the CSA-Buchanan Regional Cluster offices.

Unlike the Regional Cluster situated in Tubmanburg, Bomi County, which houses Bomi, Gbarpolu, and Grand Cape Mount Counties, other Regional Clusters are either squatting in administrative buildings or in rental buildings.

In another development, the Deputy Director-General and team extended the tour at the campus of Grand Bassa University. In a closed-door meeting with the President of the University and his Faculty, the President said the student population is progressively on the increase with students from other counties also taking advantage of the courses being offered.

The President, Dr. Samuel K. Monwell, however, voiced out the urgency of budgetary support to the University; for the delay or inadequacy is leading to both administrative and instructional staffers being underpaid; citing that most times, Administration though affected as well, being the head of the institution, has to calm the despair of their Staffers and Lecturers with the hope that plans are underway by Central Government through the Civil Service Agency, to make available their just remuneration.

In response, CSA’s Deputy Director-General Hon. Onikeh Smythe-Jackson, who was impressed with the University’s campus and facilities despite the mentioned hurdles, commended the President and Faculty of the University for their tireless efforts in empowering the young generation; as well as taking the County to such an academic height.

The Hon. Smythe-Jackson led an acquaintance tour comprised of Nyemadi Bedell, Deputy Director for Regional Division; Jimmetta Tokpah, Legal Compliance Officer, Office of the Deputy Director-General for Human Resource Management and Policy; and Joseph N. N. Swen, Head of Communications and Public Relations, CSA. This is the second of the Regional tours; the first was in February, 2022 at the CSA Tubmanburg Cluster in Bomi County.